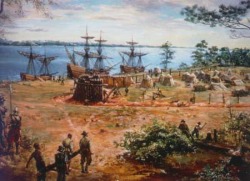 Europe has entered the Renaissance and the Age of Discovery.  European explorers set out on the high seas originally in search of treasure and a faster route to Asia.  Leif Erikson is the first known European to set foot on American soil.  Five hundred years later, the Spanish and Portuguese followed.  By the end of the 16th century, the British crossed the Atlantic, establishing permanent colonies in North America.  Over the next 100 years, British settlers fled to this New World and these new British colonies in search of new opportunities.  Adventurers went to Virginia and the current southeast, the Puritans went to New England seeking religious freedom.  After decades of new freedoms, the British North Americans decided they should be free from the rule of their far off king, and take up arms to create what will become the United States of America.